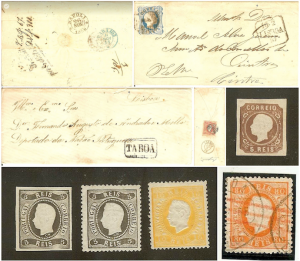 Roger Lawson, our Auctioneer, has produced the catalogue of this year’s auction, to take place on 12th March after the AGM. He scanned all 100 lots. Click on an image and then on the circled ‘i’ in the top right to see the lot number of that image. 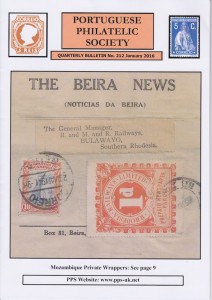 includes the George Pearson Literature Prize voting form, for members to choose their favourite article from issues 209–212. The table of content is:

PPS member John Dahl is selling his award-winning Nyassa collection. Details of the collection can be seen in the latest bulletin or in the online exhibit.  The first part will be auctioned on 4th March. The lots (number 766 to 843) start on page 16 of the online list.

The Italian Association of Military Post Collectors has created a generic philately portal that includes links to hundreds of philatelic associations and societies (including the PPS), libraries, magazines, online exhibits, and much more.  A very comprehensive resource. 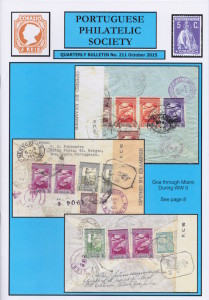 The October bulletin has been sent to members. It contains the 2016 membership renewal form. The bulletin’s content is:

Thanks to the effort of our Librarian, Frits van Beekum, the contents of the PPS library are now available online as a spreadsheet, to make it easy to search and sort books, catalogues, and periodicals by author or title. You can use the ‘Download as’ option in the ‘File’ menu to copy the spreadsheet to your computer in a variety of formats. If you are a PPS member, you may contact the Librarian to obtain a document held in the library.

PPS was again one of the societies present at Midpex, which took place on July 4th. PPS members provided displays, manned the table with past bulletins and other items available in our shop, answered queries, and, of course, took the opportunity to acquire philatelic material from the many dealers. Click on an image for more information.

Next year’s WESTPEX exhibition will feature the PPS and the ISPP as its guest societies. PPS members Roy Teixeira and Clyde Homen are involved in the organisation. Roy just sent in the most recent promotional card (click to enlarge). For more information see the event entry in our database.

Our Editor, Ron van der Holt, has added over 20 issues to the bulletin index, which means it now includes all 1200+ articles that appeared from the first to the latest bulletin (number 209).

Núcleo Filatélico do Ateneu Comercial do Porto (NFACP) has published a book on the Ceres stamps of the Portuguese overseas territories. It can be ordered from the NFACP for 15€. Postage is 1€ to Portugal, 4€ to Europe and 6.50€ to the rest of the world.

This work is an long-standing personal project that began to take shape after the publication of the book “Ceres de Portugal”(1) written in collaboration with my erudite friend of fond memory Eng. Armando Vieira.

Time has passed and now the opportunity has come to bring my project to fruition. The genesis of the Ceres stamps from the Portuguese colonies was set out in my article published in 2010(2) and now this analytical study, based on the observation of thousands of stamps, characterises the different Ceres issues from all the overseas territories of Portugal, starting with the issues of Regular Postage up to the Postage Due and Postal Tax issues, covering the period 1913 to 1949.

This book is organised in several parts. In the first, there is a summary of the different issues from each territory, highlighting the moment when the first stamps with retouched die appeared. These stamps are described along with the start of the new type for Cabo Verde, Guiné, S. Tomé e Príncipe e Angola (1932-1946), printed on “Cruz de Cristo” watermarked paper.

In the second part, a detailed description of the various types of paper is given, together with the corresponding classification, in order to facilitate correct identification. This comprises a list of tables by territory and by issue incorporating the types of paper for each stamp. This classification goes far beyond the basic types referred to in the “Selos Postais das Colónias Portuguesas” Catalogue(3), not having previously been studied in these terms. The tables also include the catalogue number, perforation, face value, quantities printed, colour, number of stamps per sheet, and also for each star position its localisation in the sheet and the corresponding quantity printed by paper and perforation.

Almost all of these frames are complemented by notes on varieties of cliché, printing errors, quantities printed; defects in stars, stamps which were surcharged or were overprinted, forgeries, and clandestine stamps. In the first table of each issue of stamps on watermarked paper of the four colonies mentioned above, there are only general references to the dislocation of the printing of the value which, as is known, appeared in the second printing and to small varieties of cliché that were not included in the general list of varieties as they are relatively insignificant.

The penultimate part of the book is devoted to varieties of cliché and printing errors and contains the most important varieties prior to the Ceres new type.

The book ends with a list of the characteristics of the different compositions of the printing plates (chases of clichés) with, for each, the location of the varieties on the sheet and the number that corresponds to them in the list of varieties.

Given the results of this study, particularly in respect of papers, varieties of cliché and some stars positions, the catalogue “Selos Postais das Colónias Portuguesas”, now published by Mundifil, may be updated accordingly in an upcoming issue.