This major philatelic event is to be held 17-22 September at Palácio Barrocal in the historical city of Évora, Portugal. The usual ‘PPS suspects’ from overseas are due to attend along with many local PPS members. This major FPF event is being jointly organized by both Portugal and Bulgaria. For more information (in Portuguese), please click on this link.

The latest PPS bulletin has just been published. It contains some interesting reading:

The bi-annual Midpex was held on July 6th at the Warwick Exhibition Centre, Warwickshire, UK. The PPS held its usual summer meeting where some pending 2013 AGM agenda matters were also discussed. It was a good event and everyone enjoyed the day, including two new members – Kenneth Mascarenhas and J Bourne – who joined the PPS on the day. 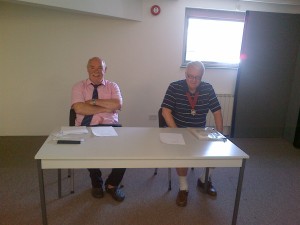 This great book on the forgeries of Portugal and its ex-colonies was authored by renowned British philatelist Capt Dave Davies and was published by our very own Portuguese Philatelic Society. This book has 137 pp and is well illustrated with superb coloured scans, sketches and well researched text. A masterpiece on the rich Portuguese philately we all love!

Distinguished PPS member, Mr John Dahl, presented May’s Sir Daniel Cooper lecture at the Royal Philatelic Society, London on the 11th May 2006 with his talk and display titled “The embossed issues of Portugal”. The lecture was well attended and you will be able to read more details of the same on this Royal Philatelic link. 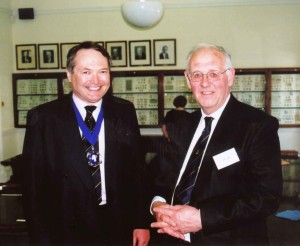 Mr John Dahl (right) with the president of the Royal, Mr Christopher Harman.

The annual summer meeting of the Portuguese Philatelic Society was held on sunday 25th June 2006, on the lawns of the residence of our beloved president, Ms Leslye Dunkley at Avon, Dorset, UK. PPS members from around the world turned up as usual for this great day of fun, good food (always supported by her neighbours), ‘shady philatelic’ deals between members as well as excellent philatelic exhibits. As usual also, the Portuguese India ‘clan’ had their own tent but made sure it mixed with the crowd! A message from the Hon. PPS Secretary:

Yet again we were treated to the bountiful hospitality of our President, Leslye Dunkley, and yet again we were blessed with gorgeous summer weather. After drinks and the usual sumptuous luncheon fare, as well as the traditional wheeling and dealing by the P.I. mafia, we settled down to some excellent displays which, once again, we were able to enjoy al fresco. These were as follows:

The philatelic proceedings were I fear rather truncated due to a certain football match, although we did of course find time to make well-deserved thankyou presentations to Leslye’s faithful band of helpers. Those present, in addition to the displayers referred to above, were our President Leslye Dunkley, Roger Lawson, João Paulo Cota, David McIntyre, Paul Woodness, Ron, Rowan, Oran and Quin van der Holt, and John Swan. It was yet again a memorable afternoon and our warmest thanks go to Leslye for hospitality above and beyond the call of duty. 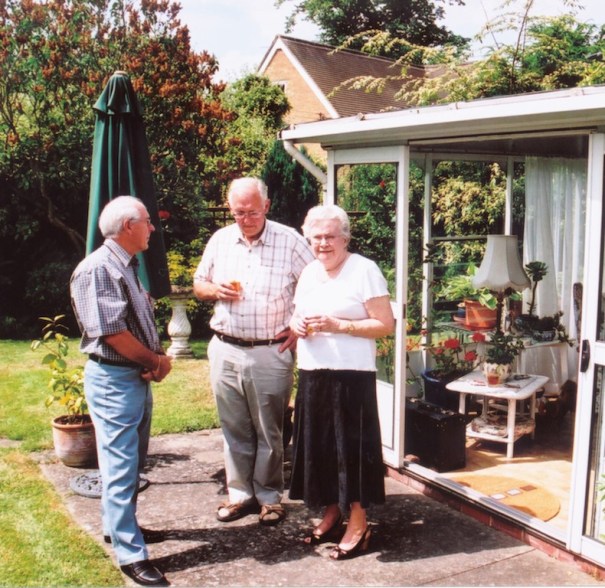 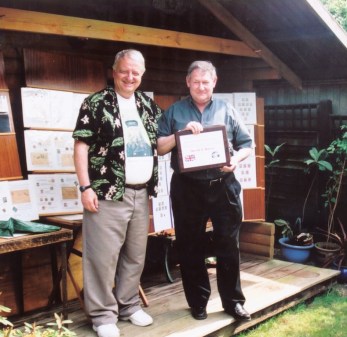 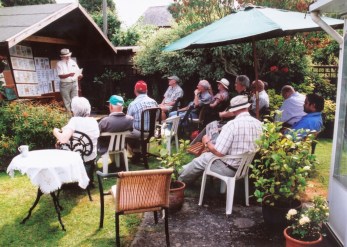 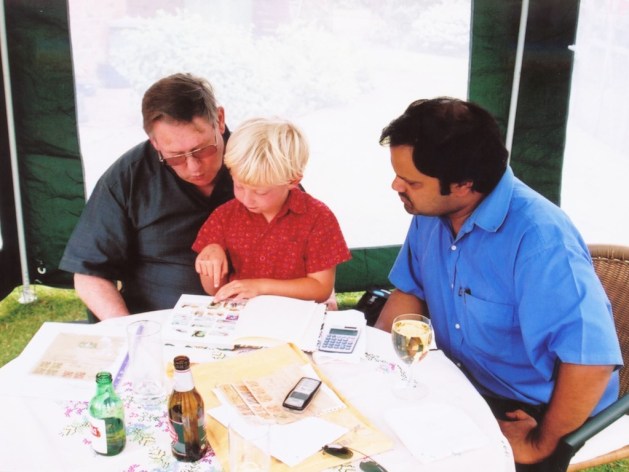 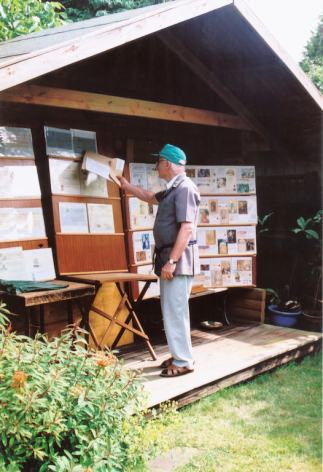 1. Anticlockwise we have our Hon president, Ms Leslye Dunkley, John Dahl and Roger Lawson having a chat…
2. Dave David (right) receiving the ‘Distinguished Philatelist’ award from ISPP and PPS member Stephen Washburne. This award has been awarded by our US sister society ISPP to Dave for his great philatelic achievements.
3. Alun Southwood presenting his provisional townmarks (1879 – 1912) exhibit.
4. Young Oran Van der Holt, our buddy philatelist and son of our bulletin editor, describing his World Dinossaurs collection to Dave Davis and João Paulo Cota in the ‘Portuguese India tent’….
5. Maurice Taylor explaining his exhibit – along with his ever novel and innovative way of wearing the PPS tie!

España 06, the great Iberian philatelic show is going to take place between October 7-13, 2006 at the beautiful Spanish city of Malaga. There will be lots of world class exhibitors participating and it is anticipated that there will be some good Portuguese philately going to be displayed. More details on this website.

Washington 2006, the famous American world philatelic exhibition, which ran from 27th May June 3rd at the Washington, DC Convention Center, Washington, USA came to an end recently. There were great exhibits to be seen with lots of the world’s rarities on display, besides more than 200 dealers on the floor. More information can be viewed and downloaded on the show’s official website.

Steve Washburne, PPS member from the USA was a director on the Jurors panel this year. There were quite a few Portugal and ex-colonies displays at this prestigious event. Some of these exhibitors are PPS members. Details and results as below:

Also, the ISPP has a one frame exhibit “Collecting P & C” in the Society/ Club section.

A new catalogue on fiscal stamps for Portugal and its ex-colonies has just been released. It has a full colour front cover, the pages being in couche mate of 130gm with black and white text. The price is Eur40 plus shipping costs and it is available from the Paulo Dias philatelic dealers in Lisbon. They are the sole distributors for Europe and you can find more details by contacting them via their website.

The National Court judge, Santiago Pedraz, has ordered the lifting of the tapes which have been preventing entry into the Afinsa company, one of the two stamp trading businesses intervened last week.

It means the Judicial Administrator can now start work and searches of the offices and those of company affiliates are expected to continue all week.

The offices of Fórum Filatélico are expected to be opened in a similar way later in the week.

Meanwhile, the National Court judges who are investigating the alleged stamp company frauds, Santiago Pedraz and Fernando Grande-Marlaska, have today called for an office to support the people who have invested in the companies. The idea is also to set up an Internet page where those affected will be able to obtain upto date information.

The top directors of both Afinsa and Forum Filatélico were arrested by the Spanish Police and are still in jail, awaiting results of ongoing Judicial investigations related to this case. Shares of the Spanish philatelic group – the third largest collectibles house worldwide, after Sotheby’s and Christies – crashed creating waves in the philatelic markets worldwide; Stanley Gibbons shares fell slightly too. Even though the later is also heavily involved in philatelic investments for the general public, this is in no way connected with their Spanish counterparts actions.